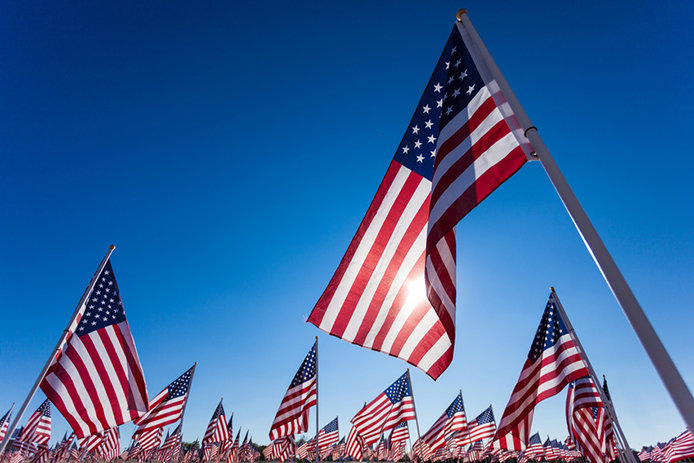 Our Hearts for the Red, White, and Blue

The American flag is a powerful symbol that carries with it much history and emotion. Over the generations, we have viewed the Stars and Stripes as an image that represents honor, loyalty, and freedom. As we look to the flag and recite our allegiance to it – and the country for which it stands – it evokes feelings in us of patriotism, pride, and thankfulness. It causes us to remember those who have served in the military and to think about the many who fought and died to protect this nation.

The Code for Old Glory

In the Code of Laws of the United States of America, Title 4 outlines the United States Flag Code. While no longer enforced by the courts, the Flag Code technically remains U.S. federal law. Following are ten highlights from the Code – some of which may surprise you!

1. Speed of the Hoist

When being put up or taken down from display on a pole, the flag “should be hoisted briskly and lowered ceremoniously.”

2. Flying with Other countries

When other nations’ flags are flown with the U.S. flag, they “should be of approximately equal size” and “are to be flown from separate staffs of the same height” as long as it is a time of peace.

When flown at half-staff, the flag “should be first hoisted to the peak for an instant and then lowered to the half-staff position.” It should again be raised to the peak when being lowered for the day.

5. The Rule for Memorial Day

When the flag is displayed on Memorial Day, it “should be displayed at half-staff until noon only, then raised to the top of the staff.”

6. Pledging Our Allegiance to the Flag

The Pledge of Allegiance should be recited “by standing at attention facing the flag with the right hand over the heart.” Members of the military who are in uniform should render the military salute. Men “should remove any non-religious headdress with their right hand and hold it at the left shoulder, the hand being over the heart.”

The flag should be displayed only from sunrise to sunset. If left up around the clock, it is to be “properly illuminated during the hours of darkness.”

No “mark, insignia, letter, word, figure, design, picture, or drawing of any nature” should ever be placed on – or attached to – the flag.

9. For Spacious Skies, Not Skylarks

The flag should not be draped over the hood, top, sides, or back of a vehicle.

10. The Stars and Stripes in Storms

Only all-weather flags should be displayed “when the weather is inclement.”

The U.S. Flag Code may be read in its entirety here. To learn more about the American flag and how to display it, check out The American Flag at USA.gov. Article courtesy of Do It Best Corp.